Began on Wednesday, 18, in Goiânia, the XXXI national meeting of Deans of research and graduate studies (Enprop) with the theme "Social and economic Relevance of research and postgraduate studies". The Director of evaluation of the Coordenação de Aperfeiçoamento de Pessoal de Nível Superior (Capes), Arlindo Philippi Jr., represented the President of the Agency, Charles Noble, during the opening Conference of the event. Arlindo pointed out that, to move forward in the development of the country, it is necessary to expand the spaces for dialogue, in addition to putting the graduate basic education service. "If we don't do this, when we will have to do to graduate?"

Then presented numbers that show the evolution in the number of graduate programs, graduates, teachers, scholarship grant. "Brazil is currently the 13th country knowledge producer in the world. Who does this is the academic community therefore investments are relevant to the development of science and technology in the country. Despite this, we still have a small impact, but we're the 8th world economy, so we still have to evolve enough to be in the position that we should be. "

On the subject, left some reflections as the importance of a new vision on Science and technology, which recognizes the importance of C & T in contemporary society and to see not only from historical or philosophical perspectives, but as processes in society that suffers and exerts influence. As actions and adaptations, addressed the need to perform science and technology geared to sustainable development, and not only economic, and to consider the role of the territory and its potential. 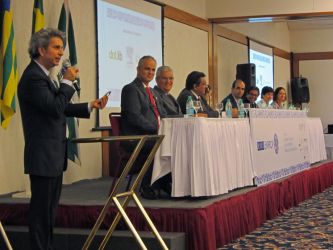 Rector of UFG addressed the importance of science and the

symbolism of this Enprop, which has as its theme the social relevance of

During the opening, the President of organizing Committee of Enprop, José Alexandre Felizola Diniz Son, talked about the meeting. "Since the mid-' 80, the Enprop is the main event organised by Foprop [Forum for Deans for research and graduate studies]. Besides him, are also held regional meetings. Now, we're at the final moment of those meetings. It's time to create a positive agenda, to present solutions to the problems encountered by sharing experiences. In programming, are large and controversial topics, such as the promotion of research, the evaluation of the SYSTEM – SNPG [National System of postgraduate studies], which should be discussed within the principles of interdisciplinarity. "

The Chairman of the Committee thanked the presence of almost 200 Vice-Chancellors and representatives of institutions of education and research. "Without science, technology and education will not be able to move forward. It is necessary to reiterate the importance of what seems obvious and sharing of experiences helps us in this target. This event is very important to restore our forces, "he concluded.

The President of the Foprop, Isac Almeida de Medeiros, also reinforced the importance of the discussions. "Are at times so it is generated the need we make decisions and find solutions to problems. We can't let one of structuring projects of the country, the most successful graduate, be harmed. "

Maira Ziad Turchi, President of FAP, representing the Government of the State of Goiás, spoke of the importance of partnerships with national and regional agencies and the relevance of the discussions for the advancement of science, technology and innovation in the country.

The Rector of the Universidade Federal de Goiás (UFG), Luiz Mello de Almeida Neto, spoke about the symbolism of this Enprop, which has as its theme the social relevance of research and the graduate. Luiz Mello also addressed the relationship of the degree with the graduate and the importance of preparation of people not only for the market or for the research, but to be teachers at all levels. "We need to train teachers, stimulate dialogue between the degree and the Bachelor's degree, in addition to unite the areas. We need to change the conception of what it means to be a teacher. "